The blow fly zone: Snuffing out prospects of imperial intervention before Syria is filled with corpses?

Excerpt below from an interesting piece written by John Helmer-in Moscow.

First this brief but connected digression:

Russia has supplied Syria with cruise missiles, as in "Done Deal"

"The Yakhont supersonic anti-ship cruise missiles have been supplied as part of Bastion mobile coastal missile systems," the source, speaking on condition of anonymity, told Interfax.

However, delivery of the weapons systems is just the first part of the process, and now “more time is needed to complete Syrian personnel training," the source said, adding that the missile system will “enable Syria to protect its entire coast from a possible seaborne attack."

Speaking on the missile delivery to Syria, Defense Minister Anatoly Serdyukov told reporters earlier this year that Russia intended to fulfill the 2007 contract.

All reports appear to indicate the missiles have already been delivered.... the uncertainty is how many.

I am always leary of anonymous sources, but, it seems possible.
It also ties in nicely with the news from a few days ago that Russia was sending an aircraft carrier to Syria- Covered here


So let's move onto the piece by John Helmer-

Regime change of the type the US, UK and French governments have pursued in Iraq, Tunisia, Egypt, and Libya is far from a demonstrable improvement for the Arabs who have survived it, as can be seen from the snapping point right now in Cairo.

Announcements from the former imperial overseers of Syrian territory – Turkey, UK and France – that they aim to oust President Bashar Assad from office imply force, but for the moment that lacks legitimacy.(no UN approval)

Technical warmaking without legality is a war crime, expensive, risky. Even for politicians desperate for cheap, Qatari and Saudi-paid wars to help their re-election chances – e.g., Barack Obama, Nicolas Sarkozy – it’s proving much more difficult to mobilize the outrage of down-home voters whose preoccupation now and for the next year is their own economic survival.

Russia’s announcement of a major deployment of naval vessels to Tartus, on Syria’s central coastline, is designed to prevent another attempt at manufacturing cover for an invasion, or lighter warmaking, such as an embargo on arms and ammunition, jamming of military communications, or sabotage. The blow flies this time are being sent in to sniff and snuff out the prospects, before Assad and his men are corpses. The blow-fly zone is a Russian military trip-wire — the first such strategic move outside the borders of the old Soviet Union for more than 20 years.The squadron on its way comprises the aircraft and missile cruiser,Admiral Kuznetsov; the anti-submarine destroyer; Admiral and the missile-firing frigate Ladny.

Blow flies
It isn’t known whether (but it can be expected that) they will be supported under the Mediterranean by hunter-killer submarines to add uncertainty and nervousness for the British and US submarines around the US surface squadron, already in position in the Eastern Mediterranean.

In the days when Greece was governed by Prime Minister Andreas Papandreou, the availability of Souda Bay in Crete for supply and armament of the US and NATO fleet would have been in doubt if the target was Syria. (Isn't that interesting? Good thing Papandreou is out of the picture)

Western media claims that Russia is doing no more than protect commercial interests in Syria are missing the point. Trade turnover between the two countries is small and dwindling – in 2008 it amounted to $1.94 billion; in 2009, $1.14 billion; in 2010, $1.12 billion. In order of magnitude, exporters to Syria start with Saudi Arabia, with 12% of the market; China with 9%; Russia with 7.5%; and Italy, Egypt and the United Arab emirates with around 5% each.

During the Soviet period, Syria ran up a debt to Moscow for arms of more than $13 billion. In 2005, $10 billion of that was written off on condition Damascus kept buying new arms from Moscow. The current arms order-book is generally reported as worth about $3.5 billion. With enemies of long standing on each one of Syria’s land borders, it is perfectly obvious that Syria must now depend on the sea for its lifeline. It is obvious too that the Kremlin intends to remind everyone that it should stay open.

That is not the end of this man's article, read the rest at the link, this is where I am ending the quoting of it.
Syria must depend on the sea for it's lifeline and Moscow intends to remind everyone that the sea stays open, for all.

A brief refresher: August 2008/Russia sends aircraft carrier to Syria
Or this also in August 2008 Israel is concerned, so why did they involve themselves in Georgia?

In this piece there is mention of Syrian/Iranian/Russian alliances and the expansion of the Tartus (Tartous) port.
All around the time of the Georgian excursion into the break away province of South Ossettia.
To much death and destruction- 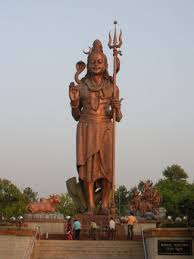 Shiva, Hindu God of death & destruction
Posted by Penny at 7:47 AM