Syria: From Nail Bombs to Israel and all points in between!

I want to open this post with a news story of Syrian forces allegedly firing "nail bombs".
Of course, this cannot be independently verified. Of course.
This report comes from the Britain-based group Syrian Observatory for Human Rights and is based on a lone claim from an unnamed activist

Unimpeachable, to be sure? Ah, not so much.
This appears to be a demonization story planted in the media for perception management purposes. We have heard stories along this line any number of times. Libya and Viagra being one really laughable example of war propaganda.

Which leads me to wonder if there was a nail bomb at all?
Or just who was using the nail bomb?

Was the person claiming to be wounded by the "nail bomb", the person attempting to use one?

This makes more sense to me, as I will explain.
The so called "nail bomb" seems to have a long history of use, but, not by governmental forces or armies. They would have no need to use a 'nail bomb'.
So who would use a nail bomb?
Let's see..... the patsy destabilizer type would find a real good use for them.

Nail bombs seem to have had their modern birth with one terrorist patsy in the UK.

More recently "nail bombs" made appearances at a subway bombing in Minsk.
At that time the President of Belarus suggested the nail bombs were the work of foreign agencies.

"the explosive device was packed with bolts, nuts, nails and ball bearings"

I covered the news of the airport bombing here. That one was a bit fishy too.

Reviewing the brief history of "nail bombs" they look to be a mode of destruction and terror used by destabilizers with intelligence backers. Good for causing fear amongst the domestic population.

An Army would have no use for this type of bomb. Therefore, as stated if there was a nail bomb being used, the person injured was most likely the one attempting to deploy it.

Onto another interesting story- Snipers rule the streets in Homs

From the msm outlet CNN. Being spun of course as Army Snipers. How does he know this to be fact? He tells a story of terror at the hands of the snipers. All very emotional.
But, gives nothing to back his claims up.
Given previous reports of snipers it seems plausible there are snipers, but what advantage would sniping citizens give to the government. None.
Randomly killing civilians serves the destabilizing forces. It will wear them down and cause them to join the destabilizing/terror forces rather then risk being killed.
The Assad government has nothing to gain undertaking these tactics which would only serve to turn more people against them. 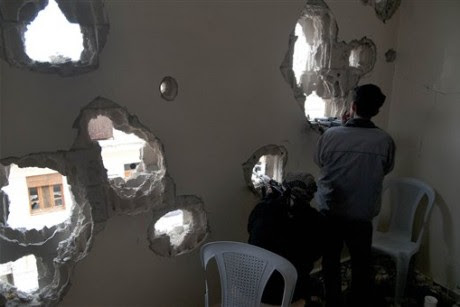 Alleged "defected Syrian soldiers position their rifles as they take cover behind a the wall of a damaged house in the Baba Amr area, in Homs province, Syria."
Do you notice that they are higher up? Well above the city streets. Are these the snipers, reported on by CNN, who have made holes in the wall to shoot people in the streets? . Entirely Possible. Their not Syrian military.

It seems the Western corporate media is working fast and furious to create a perception of a brutal despotic regime, whose people are in need of humanitarian aid under the R2P doctrine, of course.
R2P is really imperialistic, tyrannical takeover through massive slaughter via aerial bombings, sugar coated for the western audiences so they can feel "smug and secure" while their tax dollars are used for the mass slaughter of innocent civilians.

"I'd like to teach the world to sing, in perfect harmony"
"I'd like to buy the world a Coke, and keep it company"
Sugar coated indoctrination. Makes you feel good, if you don't bother about facts or reality.

It is also not a coincidence that the media is spinning fear and mayhem today because just yesterday the Arab monitors that had been going through Syria, reported all was not as bad as had been portrayed.
In fact one monitor reported that there was nothing "really frightening" going on.
Which of course raised the ire of the so called activists and the international community.

Earlier, Mohammad Mustafa al-Dabi, head of the observer mission, told the private Addounia TV that the situation in Homs is "placatory till now." His words aroused accusation and unsatisfaction among oppositon groups, which said "this is contrary to the fact," and cast doubts over the evenhandedness of the Arab mission.

Contrast the international communities voice with this-

Hassan Abdul-Azim, chairman of the opposing Syrian National Coordination Body, said the Arab observers are coordinating efforts with the body and with other organizations, contrary to the allegations of some opposition parties

If anything it would seem the Arab Monitors have emboldened the destabilizers.

Calling to arms and gathering without fear, in light of the fact that "Syria has pulled some of its tanks from the city of Homs and released about 800 prisoners."

Meanwhile at the UN Security Council- France wants "serious and rapid work" done on Syria. Which means a no fly zone and "security corridors", as they have pushed for previously.

France believes that the UN Security Council must "seriously and rapidly get to work" on a resolution on the Syrian crisis and the international community must act in view of the situation.

Not to be left out of the melange- Qatar Creates Anti- Syrian Army in Turkey.
Of course in Turkey! Turkey has been destabilizing Syria for months and months now. Damascus /NationalTurk – Qatar finances and arms radical intervention force based in Turkey to activate it in Syria with the purpose to defeat the government of president Bashar al-Assad.

And one more nation that has been heavily involved in the destabilizing of Syria
A nation that has much to gain from Syria's ruin. The Golan Heights.
A nation, whose media just happens to get an exclusive interview with persons who have allegedly fled Syria and want the "World to Bomb Syria"

In first interview with Israeli media, two" Syrian exiles" urge world to wake up.
Who of course do not give their real names. So they could be anyone, from anywhere.
Or they could be Israelis spinning a story?
I will quote interesting tidbits...

I brought Israeli-made Turkish coffee for my meeting with them. The Mideastern coffee made the atmosphere more relaxed. The cigarettes were lit one after another and a short while later the tension and suspicion evaporated.

Why are you telling your story to the Israeli media? Do you wish to convey a message to the government in Jerusalem?

“We do it so that you bomb Assad’s palace,” Amar quips. “But seriously now: I’m not a captive of the myth that Jews run the world and America, but Israel does have power and influence

"The Syrian opposition and Israel share a joint interest."

Knesset Member Isaac Herzog, who is a member of the Knesset’s Defense and Foreign Affairs Committee, met with Syrian exiles in Washington in recent weeks and he suggests that we listen to them.

“In my view, following the Assad era there is a chance for positive processes vis-à-vis Israel as well"

The destruction of Syria, oh so good, for Israel!!