Believe it or not, I have been paying attention to Syria
It appears as if the NATO mercs are making another push on that beleaguered country.
Things would improve if NATO and Israel would call off their hired killers 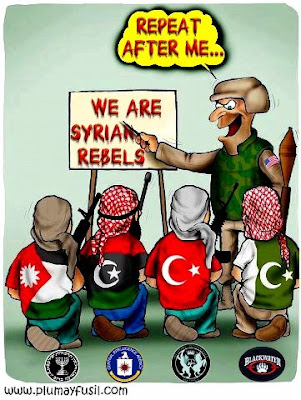 Hired Killers. May Karma strike them down...


The propaganda war is on an upswing.
There was an alleged car bomb explosion a few days ago at the Syrian/Turkey border.
I mentioned this in the comments section a few days back..
The external opposition is spinning this as an attempt to derail talks offered by SNC.
Bullocks! Pure showmanship.
Let's have a look at the narrative
Car bomb was Bashar al-Assad bid to wreck peace talks, says opposition


The head of the opposition Syrian National Council (SNC) has accused Bashar al-Assad’s regime of attempting to assassinate him with a car bomb.

There were no talks agreed to. The NATO backed opposition "offered" but that was an empty offer.

"The regime has not given a clear answer so far"

Keeping the bogus claim of 'assassination' prior to talks that were not happening, we have to ask why more lies.... and why more lies now?
Bear in mind  that the assassination  story is being spun, in the matter it is, to bolster the latest from the skull and bonesman, John Kerry. The Frankenstein monster to Hillary’s Witch.

The newest war mongering Secretary of State has begun spinning an even more exaggerated death toll in the Syrian destabilization. He is attempting to jump start the lie campaign with a new bigger, better, bolder number. This time..90,000.Of course the Saudi’s informed Mr Kerry of that figure. So, we know that figure is a worthless lie. The Saudi's have been up to it, deep, in destabilizing Syria.

Back 4 days ago when the news of the explosion/assassination attempt first broke at the border
It went, something like this.

“We don’t know whether this was a suicide bomb or whether a car that was smuggling petrol across the border blew up,” one Turkish official told Reuters news agency.

My first thought was that the NATO backed rebels blew themselves up in the area between the Turkish border and a probable target somewhere in Syria, probably Aleppo.

Television footage and photographs showed severe damage to a series of cars at the border, where a gate was blown open and part of the roof collapsed.

The Cilvegozu border gate, several miles outside the town of Reyhanli, sits opposite the Syrian gate of Bab al-Hawa, which the rebels captured last July.

We have the rebels in control of the area, including the Syrian gate of Bab al Hawa which sits directly opposite the Civelegozu gate that was damaged in the explosion. We know Turkey has been aiding and abetting the flow of explosives, armaments and fighters over the border for two years now!

That said we should automatically expect NATO/Turkey to may hay of this. They did with the mortar shells way back And they are now. Hence the spin about sabotaging the ‘talks’

Getting back to John Kerry

Secretary of State John F. Kerry said Wednesday that he is drafting diplomatic proposals to persuade Syrian President Bashar al-Assad to give up power

The cautious remarks were another sign that the Obama administration is scaling back its ambitions for Syria while expressing support for the shaky political opposition coalition it helped to establish late last year. A year after declaring that Assad’s days were numbered, U.S. officials no longer put any estimate on how long the Syrian dictator might remain in power.

The United States and key Arab and European partners have ruled out military intervention on behalf of the Syrian rebels who have fought the regime to what is basically a standstill.

A standstill it was, however, it is clear the US and allies particularly Israel do not want Assad in Syria
Hence the latest push. Should the rebels succeed in holding anything , after nearly two years of trying, the US and allies will change their tune
Let's hope the NATO mercs continue to fail
Posted by Penny at 6:34 PM