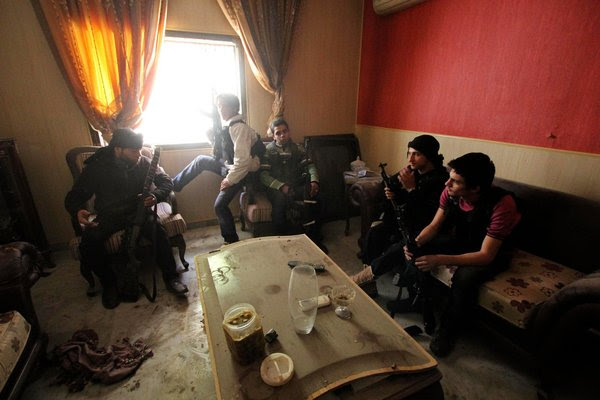 Free Syrian Army fighters inside a house in Aleppo last week. The United States has been helping Arab governments and Turkey send arms to the rebels.

Of course the NYT's doesn't ask how the fighters came to be inside this house? Whose house is this?
Where are the people who were resident in this house?  Did the fighters kill everyone in the house and then commandeer it?

Back to the weapons shipments via the CIA- visual
Very good visual linked above, please look at it. The map makes this news more understandable.

With help from the C.I.A., Arab governments and Turkey have sharply increased their military aid to Syria’s opposition fighters in recent months,

The airlift, which began on a small scale in early 2012 and continued intermittently through last fall, expanded into a steady and much heavier flow late last year-2012

Even as the Obama administration has publicly refused to give more than “nonlethal” aid to the rebels, the involvement of the C.I.A. in the arms shipments — albeit mostly in a consultative role, American officials say — has shown that the United States is more willing to help its Arab allies support the lethal side of the civil war.


And lie. Let's not forget lie to the masses via the unquestioning media  Let us not leave that out
Since it has been plainly obvious the US has been at the forefront of the destabilization of Syria

From offices at secret locations, American intelligence officers have helped the Arab governments shop for weapons, including a large procurement from Croatia.

Most of the cargo flights have occurred since November, after the presidential election in the United States and as the Turkish and Arab governments grew more frustrated by the rebels’ slow progress against Mr. Assad’s well-equipped military.

The Turkish government has had oversight over much of the program, down to affixing transponders to trucks ferrying the military goods through Turkey so it might monitor shipments as they move by land into Syria


The scale of shipments was very large, according to officials familiar with the pipeline and to an arms-trafficking investigator who assembled data on the cargo planes involved.

“A conservative estimate of the payload of these flights would be 3,500 tons of military equipment,

“The intensity and frequency of these flights,” he added, are “suggestive of a well-planned and coordinated clandestine military logistics operation.


The intensity, frequency and payloads of these flights suggest that a great many mercs have been imported in to destroy Syrai

Israel says Syria reason for restoring Turkey ties
Or - Fear over Syrian weapons motivated apology to Turkey, Netanyahu says
(HT to bot tak for second link)
And, there it is! Yes, Israel and Turkey were cooperating  all along behind the scenes.
But the need to do so in the open was the impetuous for the ‘apology’

Recall my mention of this scenario?


A worldwide campaign to push for humanitarian relief. A civil initiative is to be put in place due to the state level attempts filed at the United Nations not yielding results.

The campaign looks to be kicking off:

Human rights activists from Brazil, Russia, India, China and South Africa are appealing to their leaders to use their influence to press Syria to allow unimpeded humanitarian access to U.N. agencies.


It is time for the international community to overcome this obstacle and allow for a more effective humanitarian response in Syria – whenever and wherever it may be required.


Hitto won an election in Istanbul after 35 out of 49 Coalition members voted for him following some 14 hours of discussion in a closed meeting bringing together prominent opponents based both inside and out of Syria.

But several key Coalition members, including official spokesman Walid al-Bunni, walked out of the meeting and boycotted the vote.

And later at least 12 top Coalition members announced they had suspended their membership in the opposition body in protest against an election result they viewed as illegitimate.

Some dissidents in Istanbul said the Muslim Brotherhood, a powerful opposition bloc that is part of the Coalition, had imposed Hitto as its candidate of choice in the election.

"With all due respect to Hitto, it is not possible for the FSA to recognise a prime minister who did not gather the consensus from all components of the Coalition," said Muqdad.

While I would agree with that consensus. Since it was the same one I put forth last week.
I disagree on the spin that will take place because of this occurrence.
Jihadists, really NATO mercs, using chemical weapons can be all the excuse Israel needs.
All the excuse Israel is waiting for.