Round and round it goes. Where it will stop? Nobody knows?

This post has more updated info. Scroll down. Thanks


A European security official with knowledge of the investigation into twin bombings (buzz word) at the finish line of the Boston Marathon says initial evidence indicates they were not detonated by suicide bombers.

The official spoke from the United States on condition of anonymity because he was not authorized to speak about the U.S. investigation. He says, “investigators believe it was not the work of suicide bombers” but it’s still too early to know for sure. 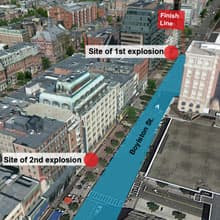 
The official said that the devices appeared to have been made with black powder and ball bearings, but that investigators were unsure how the two that exploded had been set off.

Police attended an apartment in Revere a suburb of Boston

The apartment that investigators went to was at 364 Ocean Ave., in the Boston suburb of Revere. Law enforcement officials interviewed two men there.

Boston police issued an alert for a rental van that may have sought access to the marathon route, and another alert for a man wearing dark clothes and a hood who was seeing leaving the blast zone.


Dark clothes and a hood, eh? Means no facial identity possible. Convenient.
That suggests to me "authorities" can wave a picture of anyone in front of  the target audiences face and the target audience will lap it up. Eagerly. Perception management works so well when presented along side trauma.

In all my years blogging, I recall a ball bearing attack taking place at a Moscow airport.

The suspect held extremist Wahhabi ideologies. So we are talking Chechen, most likely.
His family claimed at the time he ( alleged bomber)was already dead.
Perhaps he was? Perhaps he wasn't?

Why am I rehashing such old news at this time?
With all the tit for tat going on between the US and Russia. And the obvious intent of the US to destabilize Russia.... Let me put it this way, if Russia got the frame/ blame, I would not be the least bit surprised.
Not at this critical juncture.
Another UN Security council meeting on April 18th: Will Russia and China veto?
If Russia is blamed were the attacks timed to coincide with the UN meeting?
We shall see.

The news was spinning every angle yesterday. Rehashing 9/11. Iraq. Afghanistan. International/Domestic 'terrorism'
But backpacks were a constant no matter what angle the corporate media presented
Oh and one other phrase that got mentioned. "IED's" IED's like those that are seen in Afghanistan and Iraq- These statements were being blathered by some talking head who might have been Diane Sawyer .
IED = improvised explosive device
Intelligence agencies like those for covert ops and operatives

University of Mobile’s Cross Country Coach, who was near the finish line of the Boston Marathon when a series of explosions went off, said he thought it was odd there were bomb sniffing dogs at the start and finish lines.
"They kept making announcements to the participants do not worry, it's just a training exercise," Coach Ali Stevenson told Local 15.

Stevenson said he saw law enforcement spotters on the roofs at the start of the race. He's been in plenty of marathons in Chicago, D.C., Chicago, London and other major metropolitan areas but has never seen that level of security before.
Evidently, I don't believe they were just having a training exercise," Stevenson said. "I think they must have had some sort of threat or suspicion called in."

CNN reports a state government official said there were no credible threats before the race.

Updated # 2: it is being reported that the explosives were pressure cookers "bombs" in backpacks

The bombs used to attack the Boston Marathon appear to have been homemade improvised explosive devices (IEDs) made with components easily available in chain big box retail or hardware stores.

"IEDs represent the most ubiquitous threat to our nation for those intent on conducting physical attacks. Law enforcement and the private sector need tools to provide the capability to prevent such incidents," Robert Liscouski of Implant Sciences told Fast Company. Implant Sciences is a Boston-area company that manufactures portable explosives detectors.


-Within a day of the Oklahoma City bombing, officials had named their suspect: Timothy McVeigh. Within two days of the 9/11 attacks, investigators had zeroed in on al Qaeda.
- Two questions continue to hound authorities: Who triggered the attack, and why?
- "All of the talking heads that discuss this incident and incidents like it, if your experience and your expertise is Middle East terrorism, it has the hallmarks of al Qaeda or a Middle East group. If your experience is domestic groups and bombings that have occurred here, it has the hallmarks of a domestic terrorist like Eric Rudolph in the 1996 Atlanta Summer Olympics bombings," former FBI Assistant Director Tom Fuentes said.
- One was housed in a pressure cooker hidden inside a backpack,
- The second bomb was also housed in a metal container, but there's not enough evidence to determine whether it was also in a pressure cooker, the FBI said

"We really don't know if it's a foreign or domestic threat," said Rep. Michael McCaul, R-Texas, chairman of the House Homeland Security Committee. "We don't know whether this was a homegrown terrorist or part of a wider conspiracy."

And the possibility of a "lone wolf" attacker has some in the intelligence community concerned.
"This is what you worry about the most," a source with knowledge of the investigation said. "No trail, no intelligence."

So what is up with the delay in assigning blame?  Within the day Oklahoma was called. 9/11 the same.
Though this news report suggests it took two days, going on recall, it seemed the day of 9/11 the media was spinning Al Quaeda.

Could the delay just come down to, how authorities want to play this out?

That is not a new or surprising assertion. Many innocent persons have been sent to jail because it is politically expedient. It likely happens on a near daily basis. How many times can you recollect where local police have simply built a case against some innocent person because it is convenient. Because the public is distraught and the police need to appear to be doing something..... so they can justify there pay cheques and ever increasing budgets at taxpayer expense.
Let me give you just two examples. And state I will bet you can find hundreds, if not thousands of such cases

One in the US:

The city said it reached a $9.9 million settlement agreement on Thursday with a man who was released from prison nearly two decades after being framed for a murder he did not commit by a police officer who doubled as a mob hit man.


One in Canada. Quite a notorious case.

Mr. Milgaard spent more than two decades in prison. He was eventually freed in 1992, partly because of his former travelling companions' recantations of their trial evidence. One witness, Albert Cadrain, admitted having lied to police and the court solely in exchange for the posted $2,000 reward.


Then there was the case of Karla Homolka: She who more or less got off for three murders, after making a sweetheart deal in order to make the case against her then husband Paul Bernardo. Karla was no less guilty.
However, politics reign supreme. Not justice.

Ok, so I gave you three cases. My bad. Believe me, there were more cases that were bubbling up into my memory.

My point being..Politics seems to drive the resolution of crimes as much, if not more then justice.
When I first put this post up, I suggested a 'framing' of Russia dependent on the UN security council outcome of the April 18/13 meeting.
There are other parties that could be assigned the blame, for political reasons. It won't mean that a one of them are involved. It will just mean like 61 year old Barry Gibbs, David Milgaard and Karla Homolka the decision taken is the most politically viable.

Email ThisBlogThis!Share to TwitterShare to FacebookShare to Pinterest
Labels: perception management, Strategy of tension, US