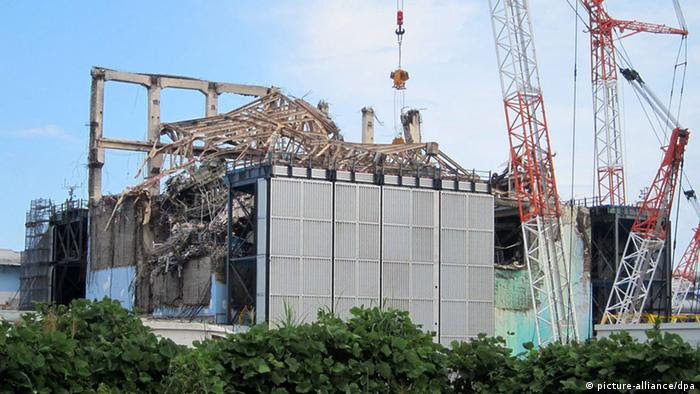 It will take two decades to decommission these reactors.

All the while radiation will continue leaking
The western corporate media will continue pretending this ongoing disaster is not really happening
And, the human caused global warming indoctrinated cult will continue promoting nuclear as 'clean/green energy'
Additionally the lies and obfuscation of this holocaust against humanity and the planet that supports Life will continue.
Too dramatic? Perhaps. But, that is the way I feel about this situation.

Tokyo Electric Power Co (TEPCO), the operators of the crippled Fukushima Daiichi nuclear plant revealed that two of their underground storage pools are leaking radioactive water. The first leakage was discovered at Pool No 2 on Friday, which had already leaked 120 tons while the second one at pool No 3 had a leak of 3 liters late Sunday

There are seven huge clay-lined storage pits that are 60 meters long, 53 meters wide and 6 meters deep, with each one covered with three layers of protective waterproof lining. The pools are part of this system and the reason for the leakage will not be determined until the two pools are drained and studied further. No 2 is already currently being drained to another storage area but the leak at No 3 is too small so there may be no need to drain it at this time.

Because of these two leaks, TEPCO said that 120 tons of contaminated water with 710 billion becquerels of radioactivity has leaked into the ground, the biggest leak since the early months after March 2011. While they assured that the water hasn’t reached the sea because the pools are half a mile from the coast, they did not offer any explanation as to where the water might have ended up

-Pool no 2: 120 tons of radioactive water
-Pool no 3: 3 litres of water? I do not find credible, that only 3 litres could have leaked from such a massive pool of water causing a rise in radioactive readings rise outside of the pool. I don't know that 3 liters leaking could cause that?
-Water has not reached the coast:  Again, a non credible claim from TEPCO. These 7 massive pools are located half a mile from the coast. TEPCO assures us the water hasn't reached the coast, BUT, do not offer any explanation as to where the water might have ended up. 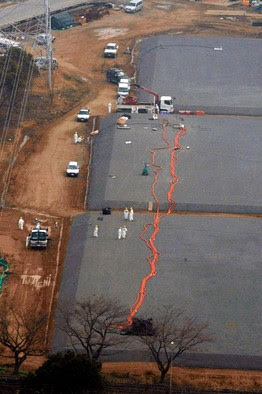 An aerial view taken Saturday at the site of Fukushima Daiichi's underground storage tanks. Water leaked from one of the tanks. (notice how large the pools are?)


The leaks are the latest trouble to hit Fukushima Daiichi in the past three weeks. Recently, the systems cooling the fuel-storage pools cut out twice because of power outages. The outages would have caused serious problems if they had continued for a few days, as the fuel must be kept cool to stop it from overheating and reacting.

The power company said on Friday said it lost the ability to cool radioactive fuel rods in one of the plant's reactors for about three hours. It was the second failure of the system to circulate seawater to cool spent fuel rods at the plant in the past three weeks.


Fukushima worker “All the other water reservoirs may leak too”

About the major leakage of highly contaminated water reservoir, Tepco admitted 2 of 7 reservoirs are already leaking.


(cf, [Out of control] Tepco admitted another contaminated water reservoir leaking as well [URL])
The Fukushima worker Happy11311 and independent journalist Oshidori are showing the concern about all the rest of the reservoirs may be leaking too.

Fukushima, still radiating the planet.
Posted by Penny at 9:45 AM