Following up on the rather sudden and surprising chemical weapons in Syria meme bomb being dropped and the subsequent fall out. I see mention of Israel as the ‘joker’ in all of this... Took some time to read up on the Joker. Jokers are wild. The Joker can be extremely beneficial or extremely detrimental, depending on the game being played. That said, Jokers are definitely extreme.
And that extremism defines that state of Israel, perfectly.
“a tendency or disposition to go to extremes or an instance of going to extremes”

So, the Joker it is! 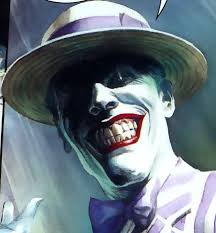 What compelled Israel to play the Joker, regarding unsubstantiated, implausible chemical weapons??

Israel Sees U.S. Response to Syria as Gauge on Iran
One thing that is clear from this article: Israel is attempting to manipulate the US.
To force the hand of ??  To get the US to pass judgement??

As President Obama wrestles with how to respond to new assessments that Syria appears to have used chemical weapons, leaders in Israel say they will be watching for clues about how he might handle the Iranian nuclear issue in the future.

To the Israelis, how Mr. Obama navigates the next few weeks will be viewed as a gauge for what he might do later regarding the potentially bigger confrontation in the region.

Amos Harel, the defense correspondent for the Israeli daily newspaper Haaretz, said in a column Friday that this week’s wrestling over chemical weapons might have been as much about Iran as it was Syria. He noted that a speech Tuesday by Brig. Gen. Itai Brun, Israel’s top military intelligence analyst, asserting that sarin had been used was followed by one in which Amos Yadlin, the former chief of military intelligence in Israel, declared that Iran was at or about to cross the red line set by Israel’s prime minister, Benjamin Netanyahu.

“It’s possible that mention of chemical weapons was also intended as a wake-up call to the U.S.,” Mr. Harel wrote. “Israel may have expected that the Americans would stick to their guns in the Syrian case, as well, as a way of sending a regional signal that would also be understood in Tehran.”

Still, Mr. Hanegbi said, Israel was not trying to force Mr. Obama’s hand. “I think that we have no interest in the world getting sucked into the fighting in Syria.”


Mr Hanegbi is lying. Israel has great interest in the world getting sucked into fighting in Syria
Or Israel would not have thrown the extremely bogus chemical weapons meme out in the manner in which they did. Once we separating fact from fallacy there should be no sense of surprise when reading this news..

PM convenes security cabinet amid Syria concerns, After requesting ministers not to discuss Syria without permission.


Why would the PM order Ministers to be silent on Syria unless approval is given in advance?

Prime Minister Binyamin Netanyahu convened his security cabinet Sunday for an in-depth discussion of the situation in Syria.

Nevertheless, Environmental Protection Minister Amir Peretz told reporters before Sunday's cabinet meeting that it was incumbent upon the US and the international community to take action to halt the carnage in Syria.

Still applying the pressure... and why not Israel will be the single biggest beneficiary, in the ME,  of a destroyed Syria. As has been obvious, since March 2011.
A point I have hammered repeatedly, here on the blog

The Fueling of Unrest in Syria, Israel’s Territorial Ambitions
Why We Must Change The Narrative On Syria

Speaking of the absurd Israeli ‘chemicals weapons’ claim......
"Evidence" of Syria chemical weapons use not up to U.N. standard

Assertions of chemical weapon use in Syria by Western and Israeli officials citing photos, sporadic shelling and traces of toxins do not meet the standard of proof needed.
Ralf Trapp, an independent consultant on chemical and biological weapons control, said, "There is a limit to what you can extract from photograph evidence alone. (Which makes Israel’s shaving creams pictures totally useless, unsurprisingly) What you really need is to get information from on the ground, to gather physical evidence and to talk to witnesses as well as medical staff who treated victims."

Testing for sarin, he said, requires access to the environment where the nerve agent was used or the clothing of someone who was exposed.

Sarin is a fast-acting nerve agent that was originally developed in 1938 in Germany as a pesticide. It is a clear, colorless, tasteless and odorless liquid that can evaporate quickly into a gas and spread into the environment, according to the U.S. Centers for Disease Control and Prevention.

Because it evaporates so quickly, sarin presents an immediate but short-lived threat.


Even if samples were made available to the OPCW by those making the assertions, the organisation could not use them.

"The OPCW would never get involved in testing samples that our own inspectors don't gather in the field because we need to maintain chain of custody of samples from the field to the lab to ensure their integrity," said Luhan.


Therefore Israeli, British and French claims cannot be substantiated and should be considered, false.
Once you have read above, hit the link!


Why Russia Does Not Believe Syria Used Chemical Weapons