Redrawing the Map of the Russian Federation: Partitioning Russia

Partitioning? I call it balkanizing.
This is a topic that's been addressed at the blog, though it's been a while
Flashback 2012- Predicting the Future: The destabilization of Russia

The Plans of the Empire of Chaos for Russia

Breaking the Soviet Union has not been enough for Washington and NATO. The ultimate goal of the US is to prevent any alternatives from emerging in Europe and Eurasia to Euro-Atlantic integration. This is why the destruction of Russia is one of its strategic objectives.
Washington’s goals were alive and at work during the fighting in Chechnya. They were also seen in the crisis that erupted with EuroMaidan in Ukraine. In fact, the first step of the divorce between Ukraine and Russia was a catalyst for the dissolution of the entire Soviet Union and any attempts at reorganizing it.
The Polish-American intellectual Zbigniew Brzezinski, who was US President Jimmy Carter’s national security advisor and an architect behind the Soviet invasion of Afghanistan, has actually advocated for the destruction of Russia through gradual disintegration and devolution. He has stipulated that «a more decentralized Russia would be less susceptible to imperial mobilization». [1] In other words, if the US divides Russia up, Moscow would not be able to challenge Washington. In this context, he states the following: «A loosely confederated Russia—composed of a European Russia, a Siberian Republic, and a Far Eastern Republic—would find it easier to cultivate closer economic regulations with Europe, with the new states of Central Asia, and with [East Asia], which would thereby accelerate Russia’s own development». [2]
These views are not merely constrained to some academic’s ivory tower or to detached think-tanks. They have the backing of governments and have even cultivated adherents. One reflection of them is below.


US State-Owned Media Forecasts the Balkanization of Russia


Dmytro Sinchenko published an article on September 8, 2014 about dividing Russia. His article is titled «Waiting for World War III: How the World Will Change». [3] Sinchenko was involved in EuroMaidan and his organization, the Ukrainian Initiative «Statesmen Movement» (Всеукраїнської ініціативи «Рух державотворців»), advocates for an ethnic nationalism, the territorial expansion of Ukraine at the expense of most the bordering countries, reinvigorating the pro-US Georgia-Ukraine-Azerbaijan-Moldova (GUAM) Organization for Democracy and Economic Development, joining NATO, and launching an offensive to defeat Russia as part of its foreign policy goals. [4] As a note, the inclusion of the word democracy in GUAM should not fool anyone; GUAM, as the inclusion of the Republic of Azerbaijan proves, has nothing to do with democracy, but with counter-balancing Russia in the Commonwealth of Independent States (CIS).
Sinchenko’s article starts by talking about the history of the «Axis of Evil» phrase that the US has used to vilify its enemies. It talks about how George W. Bush Jr. coined the phrase in 2002 by grouping Iraq, Iran, and North Korea together, how John Bolton expanded the Axis of Evil to include Cuba, Libya, and Syria, how Condoleezza Rice included Belarus, Zimbabwe, and Myanmar (Burma), and then finally he proposes that Russia be added to the list as the world’s main pariah state. He even argues that the Kremlin is involved in all the conflicts in the Balkans, Caucasus, Middle East, North Africa, Ukraine, and Southeast Asia. He goes on to accuse Russia of planning to invade the Baltic States, the Caucasus, Moldova, Finland, Poland, and, even more ridiculously, two of its own close military and political allies, Belarus and Kazakhstan. As the article’s title implies, he even claims that Moscow is intentionally pushing for a third world war.
This fiction is not something that has been reported in the US-aligned corporate networks, but is something that has been published directly by US government-owned media. The forecast was published by the Ukrainian service of Radio Free Europe/Radio Liberty, which has been a US propaganda tool in Europe and the Middle East that has helped topple governments.
Chillingly, the article tries to sanitize the possibilities of a new world war. Disgustingly ignoring the use of nuclear weapons and the massive destruction that would erupt for Ukraine and the world, the article misleadingly paints a cozy image of a world that will be corrected by a major global war. Radio Free Europe/Radio Liberty and the author are essentially saying that «war is good for you» to the Ukrainian people and that some type of utopian paradise will emerge after a war with Russia.
The article also fits very nicely into the contours of Brzezinski’s forecast for Russia, Ukraine, and the Eurasian landmass. It forecasts the division of Russia whereas Ukraine is a part of an expanded European Union, which includes Georgia, Armenia, the Republic of Azerbaijan, Belarus, Israel, Lebanon, and Denmark’s North American dependency of Greenland, and also controls a confederation of states in the Caucasus and the Mediterranean Sea—the latter could be the Union for the Mediterranean, which would encompass Turkey, Syria, Egypt, Libya, Tunisia, Algeria, Morocco, and the Moroccan-occupied Sahrawi Arab Democratic Republic or Western Sahara. Ukraine is presented as an integral component of the European Union. In this regard, Ukraine appears to be situated in a US-aligned Franco-German-Polish-Ukrainian corridor and Paris-Berlin-Warsaw-Kiev axis that Brzezinski advocated for creating in 1997, which Washington would use to challenge the Russian Federation and its allies in the CIS. [5]
Redrawing Eurasia: Washington’s Maps of a Divided Russia
With the division of the Russian Federation, Radio Free Europe’s/Radio Liberty’s article claims that any bipolar rivalry between Moscow and Washington would end after World War III. In a stark contradiction, it claims that only when Russia is destroyed will there be a genuine multipolar world, but also implies that the US will be the most dominant global power even though Washington and the European Union will be weakened from the anticipated major war with the Russians.

Accompanying the article are also two maps that outline the redrawn Eurasian space and the shape of the world after the destruction of Russia. Moreover, neither the author nor his two maps recognize the boundary change in the Crimean Peninsula and depict it as a part of Ukraine and not the Russian Federation. From west to east, the following changes are made to Russia’s geography:
• The Russian oblast of Kaliningrad will be annexed by Lithuania, Poland, or Germany. One way or another it will become a part of an enlarged European Union.
• East Karelia (Russian Karelia) and what is currently the federal subject of the Republic of Karelia inside Russia’s Northwestern Federal District, along with the Federal City of St. Petersburg, Leningrad Oblast, Novgorod Oblast, the northern two-thirds of Pskov Oblast, and Murmansk Oblast are split from Russia to form a Finnish-aligned country. This area could even be absorbed by Finland to create a Greater Finland. Although the oblast of Archangel (Arkhangelsk) is listed as a part of this partitioned area in the article, it is not included in the map (probably due to a mistake in the map).
• The southern administrative districts of Sebezhsky, Pustoshkinsky, Nevelsky, and Usvyatsky in Pskov Oblast from the Northwestern Federal District and the westernmost administrative districts of Demidovsky, Desnogorsk, Dukhovshchinsky, Kardymovsky, Khislavichsky, Krasninsky, Monastyrshchinsky, Pochinkovsky, Roslavlsky, Rudnyansky, Shumyachsky, Smolensky, Velizhsky, Yartsevsky, and Yershichsky, as well as the cities of Smolensk and Roslavl, in Smolensk Oblast from the Central Federal District are joined to Belarus. The Smolensk Oblast’s Dorogobuzhsky, Kholm-Zhirkovsky, Safonovsky, Ugransky, and Yelninsky districts appear to be portioned further in the map as the new border between Belarus and the proposed amputated Russia.
• The North Caucasian Federal District of Russia, which is comprised of the Republic of Dagestan, the Republic of Ingushetia, the Kabardino-Balkar Republic, the Karachay-Cherkess Republic, the Republic of North Ossetia–Alania, Stavropol Krai, and Chechnya, is separated from Russia as a European Union-influenced Caucasian confederation
• The South Federal District of Russia, which is constituted by the Republic of Adygea, Astrakhan Oblast, Volgograd Oblast, Republic of Kalmykia, Krasnodar Krai, and Rostov Oblast, is completely annexed by Ukraine; this leads to a shared border between Ukraine and Kazakhstan and cuts Russia off from the energy-rich Caspian Sea and a direct southern frontier with Iran.
• Ukraine also annexes the oblasts of Belgorod, Bryansk, Kursk, and Voronezh from Russia’s most heavily populated federal district and area, the Central Federal District.
• Siberia and the Russian Far East, specifically the Siberian Federal District and the Far Eastern Federal District, are torn off from Russia.

Read the entire article at the above link, but, I will end this post with another image from this lengthy piece 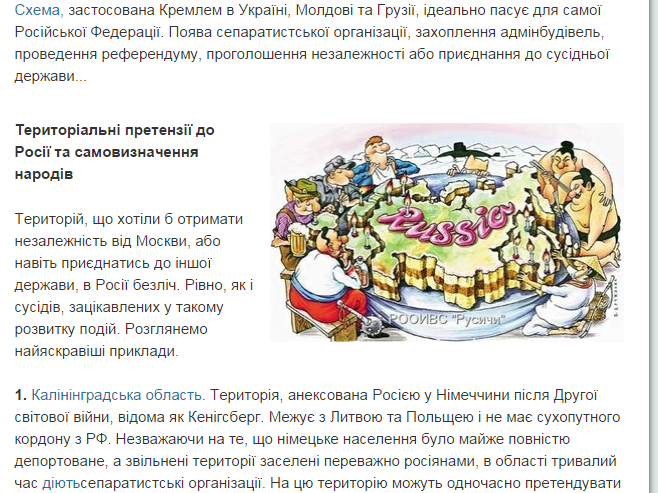