Were talkin' lack of sanctions and weather

Recall my mention of the NATO media making too much of this sanctioning business?

His comments, playing down the impact of recent economic sanctions.


"Turkey remains our large trading partner. Our embargo is selective, very selective, concerning food and only certain (items)," Ulyukayev said in an interview with Russian state television.
"They are designed in a way so that existing contracts won't be violated. Here we are for the time being very cautious. We don't want to create problems for Turkish business, and even less for our own business and citizens."

Ulyukayev's comments come a day after President Vladimir Putin signed a decree that widened the sanctions to include companies controlled by Turkish citizens even if the companies did not fall under Turkish jurisdiction.

At the same time Putin also ordered his government to draw up a list of exceptions to the sanctions, giving Russia leeway to continue doing business with Turkish companies if it thinks Russia would benefit.

An aside: Turkey is also going to get slammed with a massive snowstorm- AGW baloney and all that drivel.....


Setting the stage for the snowfall across eastern and northern Turkey is the unseasonably cold air arriving from eastern Europe. Temperatures later this week will be held 6-10 degrees Celsius (10-20 degrees Fahrenheit) below normal. 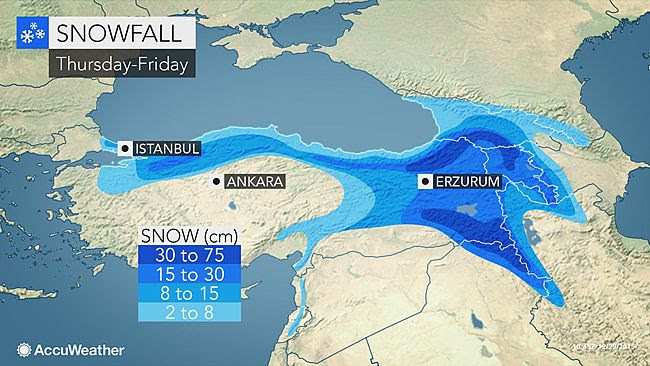 The burying snowfall to the north threatens to severely disrupt travel, both on the ground and in the air. New Year's Eve festivities may have to be canceled.

The snow will clog roads, making travel hazardous and extremely difficult for motorists. Airline passengers should prepare for cancellations and are urged to make alternate plans before the snow arrives.

After the last two brutal winters here, I don't envy Turkey, one bit! Making that Russian energy all the more vital!

I see Mexico also got a blast of cold air and snow:


"It's the most intense snowfall in the last 55 years," Efren Matamoros, the civil protection director in the border city of Ciudad Juarez, told AFP.

AGW, I laugh in your face and  say thank you (at least for now)El Nino!

Though the east coast of Canada hasn't fared as well as Southern Ontario, and yes we've just had our first wintery blast. But so far, more normal, if not a bit milder.  However, I expect that will change. It always does come January.


The Kurdi Psyop Perpetrated on Canada & Almost Everyone Else