A Kurdish rebel group has claimed responsibility for a car bomb attack in the Turkish capital city that killed at least 35 people. 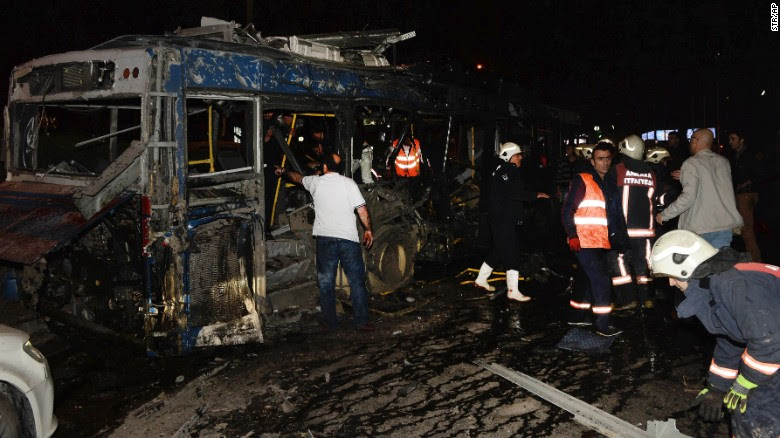 The bombing in Ankara on Sunday was the work of a female suicide car bomber, Seher Cagla Demir, who was identified in a statement posted Thursday on the website of the Kurdish Freedom Falcons, or TAK.

In the statement on its website, TAK -- an offshoot of the Kurdish separatist group, PKK -- confirmed that Demir led a team of attackers, referring to her as "our comrade."

In February, TAK claimed responsibility for another bombing in Ankara that killed 30 people. The government said that attacker was a Turkish citizen who also traveled to Syria and apparently re-entered the country posing as a Kurdish Syrian refugee.

International media conducts itself in a dishonest manner, always. Assad was attacking "his own people" according to the media. That was not the case. Ghadafi was attacking Libyans who wanted freedom . LIE.  According to the lying NATO media, msm and alt, Turkey is waging a war against the Kurd. Just another media lie.
FACT: The PKK is waging a war against Turkey, and it's people, including resident Kurds. The PKK waged a war against Syrians and is now claiming annexed Syrian territory as their own  Syria Kurds (Not!) Say They'll Declare A Federal Region in Syria

US Embassy Warns, AGAIN, of Possible Terror Attack in Turkey


And Finally:
The PKK subsidiary YPG/PYD has declared an autonomous zone in Syria- on land they annexed from Syria- With the help of the US/NATO, of course.

The Democratic Union Party (PYD) of Syria has proclaimed the creation of a "federal democratic system" in the north of Syria, Al Jazeera has said.

The Thursday announcement follows meetings earlier this week involving members of the Kurdish, Arab, Assyrian and other communities in the region.

The Syrian National Coalition does not accept what it calls a "unilateral" declaration the declaration, which was also dismissed by the government in Damascus.

Syrian authorities said in a statement that "creating a union or a federal system... contradicts the Syrian constitution and all the national concepts and international resolutions".