Russia and Turkey Mend Fences. It's Either a Big Deal or It's Much Ado about Nothing?

The media goes between making this a big deal to downplaying the significance. It's either two despots getting together to be despotic or it's much ado about nothing.  It appears we'll have to use our own discernment. Looks to me as if some progress was made. The fact they had the meeting indicates progress. The fact there will be more meetings tells us there is progression or
a moving forward. 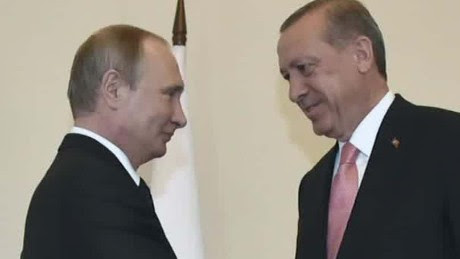 
Russia and Turkey took a big step toward normalizing relations on Tuesday, with their leaders announcing an acceleration in trade and energy ties at a time when both countries have troubled economies and strains with the West.

The visit is being closely watched in the West, where some fear both men, powerful leaders ill-disposed to dissent, might use their rapprochement to exert pressure on Washington and the European Union and stir tensions within NATO, the military alliance of which Turkey is a member.

Mr. Putin said Moscow would gradually phase out sanctions against Ankara, imposed after the Turks shot down a Russian fighter jet near the Syrian border nine months ago, and that bringing ties to their precrisis level was the priority.

“Do we want a full-spectrum restoration of relations? Yes, and we will achieve that,” Mr. Putin told a joint news conference after an initial round of talks. “Life changes quickly.”

Co-operation would be increased on projects including a planned $20-billion (U.S.) gas pipeline and a nuclear power plant to be built in Turkey by the Russians, Mr. Erdogan said, as well as between their two defence sectors.

“God willing, with these steps the Moscow-Ankara axis will again be a line of trust and friendship,” Mr. Erdogan said.

The leaders were to discuss the war in Syria, over which they remain deeply divided, in a subsequent closed-door session. Progress there is likely to be more halting, with Moscow backing Syrian President Bashar al-Assad and Ankara wanting him out of power.


"We are building a strong mechanism with Russia regarding Syria; we think alike on the ceasefire, humanitarian aid and a political solution," Turkish Foreign Minister Mevlüt Çavusoglu said Wednesday in a televised interview.

If Turkey wants Assad out, as G&M implies, while Russia has maintained Assad’s leadership is a decision for the Syrians- how is it according to Cavusloglu the two nations think alike regarding Syria?

G&M:“In Washington, the U.S. State Department criticized charges in Turkish media that a Washington think tank had been behind the coup attempt.

“Conspiracy theory, inflammatory rhetoric” are “not helpful” except when the US engages in such behaviour, as they do so very often. In fact, all of the time

DS: Speaking at the official Anadolu Agency's Editors' Desk in Ankara, Foreign Minister Çavusoglu said a tripartite mechanism is being established including officials from the intelligence services, foreign ministries and armed forces, which would replace separate ties established between these institutions. He said that the delegation will go to St. Petersburg on Tuesday night.

Barkey, who was born in Turkey, was attending a long-planned academic conference on an island off Istanbul on July 15 when Turkish army, navy and air force units sought to overthrow President Recep Tayyip Erdogan.


The conference may have been long planned? So it is claimed? Unverifiable.
You’re supposed to believe, this so called academic conference, was long planned making it just a coincidence Henri Barkey was on an island off Istanbul on the very day the coup took place
Maybe it was a coincidence, but, maybe it wasn’t.

Against a backdrop of rising tensions between Turkey and the West, Presidents Vladimir V. Putin of Russia and Recep Tayyip Erdogan of Turkey pledged on Tuesday to repair relations after nine months of open antagonism.

Although their meeting in St. Petersburg on Tuesday produced little beyond vows of friendship and cooperation, (the world according to the NYT’s) the symbolism of the two former antagonists coming together for a friendly talk was enough to raise alarms in Western capitals.

Washington and Ankara, long at odds over American support of the Kurds in Syria and Iraq, have had a series of problems lately.

No one predicted a radical shift in relations, at least not immediately. (I thought little was  produced beyond platitudes?)

“It is true that we lived through a complicated moment in our interstate relations,” Mr. Putin said at a joint news conference televised from St. Petersburg. “But we all would like to — and we feel that our Turkish friends want the same — overcome those complications.”

Feeling increasingly isolated this summer, Mr. Erdogan wrote a letter in June offering the apology Mr. Putin had demanded for the downing of the Russian jet. With that done, steps could begin toward a normalization of relations.


Was Erdogan feeling increasingly isolated? NYT’s nonsense.
Wasn’t Turkey, in fact, being isolated by it’s supposed NATO allies- Yes, yes, it was.
“Washington and Ankara, long at odds over American support of the Kurds in Syria and Iraq”
Along with the PKK ending the ceasefire which would have had the blessing of the US. After all it is the US/Israel/NATO that supports the Kurdish thugs of the PKK, YPG, TAK and the alphabet groups of Iranians Kurds... in order to remake the region. That would be enough to isolate the Turkish state.

“Efforts to restore ties then accelerated after the July 15 coup attempt in Turkey, after which Mr. Putin was the first leader to call to offer support. “It was very important from a mental perspective, this kind of psychological support,” Mr. Erdogan said at the news conference”

As a possible sign of good will, a major Kurdish representative office closed in Moscow on Sunday, although the local representative said it was because of rent costs rather than politics.

Russia’s gas industry, starting with Gazprom, the state-controlled behemoth, is eager to get the Turkish Stream back on track, because other routes to Europe have been blocked, and Turkey is just as keen on becoming a hub for gas distribution.

“I think the interests of Gazprom and the energy companies are the cornerstone of what is happening,” said Mr. Vasilyev, the analyst.

On Tuesday, the two leaders said they were planning to restart all that. Mr. Erdogan repeated their pre-crisis pledge to eventually increase annual trade between the countries to $100 billion.

“Both countries are committed and determined to returning our relationship to its pre-crisis level,” Mr. Erdogan said at the news conference.

Mr. Putin said Mr. Erdogan had pledged to grant the Akkuyu project the status of a “strategic investment,” helping it avoid taxes and reap other benefits.

Russia agreed to lift sanctions that had barred some agricultural imports and had stopped the flow of millions of Russian tourists.