A Turn for The Worse: Obama "Considers" Arming Syrian Kurds to Fight ISIS

1- Thought the Kurds had already been fighting ISIS and were in fact the 'fiercest fighters' against ISIS?? Still, all this time later........ ISIS exists.
*As the commonly presented 'to be feared enemy'
*And the obfuscation by US/NATO/Israel to remake the region

2- The NYT's  headline presents this as if this is some new or unique plan Obama is considering.
It is neither new nor unique, as readers here already know. If you don't, have no fear, I'll refresh!


In a major boost for forces fighting Islamic State extremists in Syria but likely to stir controversy with NATO ally Turkey, the United States on Monday began airdropping pallets of weapons and ammunition to a Syrian Kurdish militia.

“They started dropping the arms in Rojava early this morning,” said Polat Can, the spokesman for the Democratic Union Party (PYD)

Unconfirmed but interesting and quite plausible

PUKmedia: YPG will receive 120ton of weapons&ammo fr US within 24h. Not confirmed by YPG yet. http://pukmedia.com/KS_Direje.aspx?Jimare=69493 …

Silent Soldier/2015-"The 50 tons of supplies were airdropped into Al-Hasakah province, home to Syrian Kurds, Arabs and a minority Assyrian community"

Bloomberg: US Arms Drop Ends Up Arming the Kurds


They were dropped by three American C-130 aircraft, which met no resistance from the air or ground, a second administration official said.


“There was an urgent need to resupply,” a senior Obama administration official said in a hastily organized conference call Sunday night. “This was the quickest way to get the job done.”

Clearly there have been multi ton airdrops to the Kurds in Northern Syria already!

- Never mind that which is delivered with via the Americans at the bases they've built in annexed Syrian territory
-Never mind the weapons that flow freely between Iraq and Syria via the PKK, via land routes

Considering known facts, how is it we are supposed to believe the US is just now planning to directly arm Syrian Kurdish fighters? Obviously we cannot believe this claim.That said it is very clear the US is sending  more arms to northern Syria with the intention of increasing  the level of warfare ongoing in Syria. Including upping the ante with Turkey!

I understand some readers here think the US hasn't already betrayed Turkey- but the US has.
And they did long before the coup.  All those air drops to the Syrian Kurds were the equivalent of knives into the nation of Turkey... It's going to get much worse.

The NYT's mentions the problems the US is having with Turkey.


WASHINGTON — The Obama administration is weighing a military plan to directly arm Syrian Kurdish fighters combating the Islamic State, a major policy shift that could speed up the offensive against the terrorist group but also sharply escalate tensions between Turkey and the United States.

Oh, yes it will escalate the tensions.  Which tells us tension is already present. And clearly the US wants to escalate that tension. As they did with the previous airdrops. And the coup. Aiding and abetting the PKK in Turkey.


Could these be the fierce "ISIS" fighters pictured below? 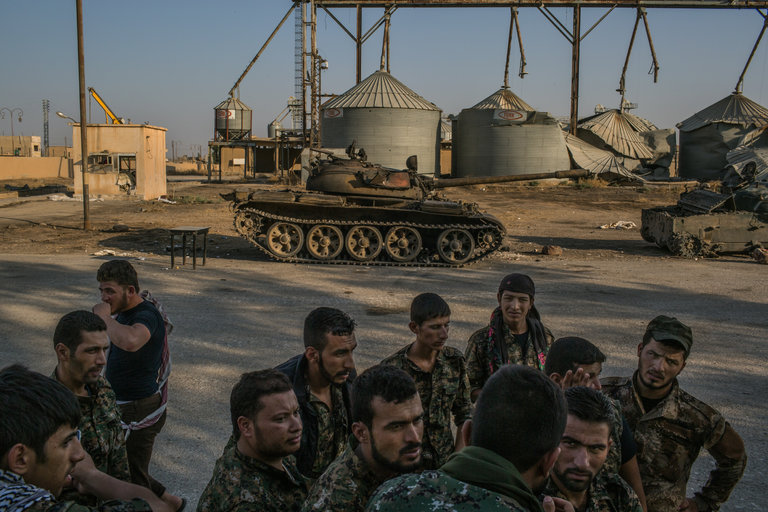 Kurdish Y.P.G. fighters last year during a battle for Tel Tamer, Syria, at their combat outpost on the outskirts of the city. Credit Mauricio Lima for The New York Times

The plan has been under discussion by the National Security Council staff at a moment when President Obama has directed aides to examine all proposals that could accelerate the fight against the Islamic State, also known as ISIS or ISIL. Mr. Obama has told aides that he wants an offensive well underway before he leaves office that is aimed at routing the Islamic State from Raqqa, the group’s de facto capital in northern Syria.

Deciding whether to arm the Syrian Kurds is a difficult decision for Mr. Obama, who is caught in the middle trying to balance the territorial and political ambitions of Turkey and the Syrian Kurds, two warring American allies that Washington needs to combat the Islamic insurgency.

Directly providing weapons for the first time to the Syrian Kurds, whom American commanders view as their most effective ground partner against the Islamic State, (Meme)  would help build momentum for the assault on Raqqa. But arming them would also aggravate Mr. Obama’s already tense relations with Turkey’s president, Recep Tayyip Erdogan. The United States and Turkey sharply disagree over Syria’s Kurdish militias, which Turkey sees as its main enemy in Syria.

The plan has filtered up through the Pentagon’s Central Command, which oversees American military operations in the Middle East. It calls for providing the Syrian Kurds with small arms and ammunition, and some other supplies, for specific missions, but no heavy weapons such as antitank or antiaircraft weapons.

American officials note that the proposal has not yet been presented at the administration’s highest levels for decision. White House officials declined to comment on it.

The review of the military plan comes as American commanders fear that their timetable to take Raqqa was set back after Turkey recently plunged into Syria with ground forces for the first time.


The Turkish offensive cut off a crucial Islamic State supply route but also rolled back the territorial gains of Kurdish militias, who despite help on the ground from American Special Operations advisers have criticized the United States for allying with Turkey.


American commanders view the plan to arm the Syrian Kurds, whose population straddles the border with Turkey, as an incentive to keep them on board for the fight against the Islamic State. Asked if the recent volatile military and political situation around the Syrian-Turkish border had slowed the pace for taking Raqqa, Gen. Joseph L. Votel, the head of Central Command, said last week that it might have.

“We don’t necessarily control the timeline ourselves,” General Votel told a security conference here sponsored by the Institute for the Study of War.

Associates of General Votel say he has expressed much greater concern in private over maintaining momentum in the fight against the Islamic State, especially if the Syrian Kurds and Turkey continue to clash with each other.

General Votel said last week, “We have to play a leadership role on both sides” — Turks and Kurds — “and keep focus on the mission to defeat ISIS.”

In the past two years the Pentagon has provided small arms, ammunition and other supplies to a group acceptable to Turkey — the Syrian Arabs, a minority in the Kurdish-dominated umbrella group that is fighting the Islamic State. About 350 resupply deliveries have been made by air or by land to the Syrian Arab militias, according to the American military command in Iraq.

But out of deference to Turkey, the United States has not directly armed the Kurdish fighters themselves. (LIE!! - see all linked articles and previous posts that open this one)

Many analysts say the Pentagon’s support to the Syrian Arabs is basically cover for aid to the Syrian Kurds, who call the shots in the wider alliance, coordinate airstrikes with the United States, and are considered the most capable fighters. But arming the Kurds directly, even for just specific missions, would still be a significant shift practically and symbolically.

-The US is looking to increase the war making.
-The US is looking to increase tensions with Turkey
-The US wants to assist the Kurds because together they are redrawing the borders of the middle east & asia
- Destroying existing nation states- causing the refugee crisis which is globally destabilizing and culturally destructive.
And Israel is looking at this destruction and expansion as their win/win- Because Arabs and Christians have been decimated in this action- Which pleases Israel to no end!

One last video, available at the link below:

Obama, Netanyahu: US and Israel Have 'Unbreakable' Bond

Speaking after a closed door meeting, President Obama and Israeli Prime Minister Benjamin Netanyahu say the bound between U.S. and Israel is "unbreakable."

An unbreakable bond of massive destruction and ethnic cleansing. Yup!


Russia Called US Twice To Stop US Airstrikes on SAA