I was meaning to get this out last week- Didn't have time. That said- It's obvious the AKP is under attack, as is Turkey. The US is fully cognizant of this fact, and in my opinion fully participatory.

The Latest: AKP Member Killed Outside of His Home! Link
Hurriyet

A member of the ruling Justice and Development Party (AKP) was killed in an armed attack in the Şemdinli district of the southeastern province of Hakkari on Sept. 14.

Ahmet Budak, who was the AKP’s Hakkari candidate in the Nov. 1, 2015, elections, was killed while his son was with him, Doğan News Agency reported.

Budak was shot as he was returning home from a visit to mark the Eid al-Adha holiday with his son, when unknown assailants shot him in front of his house.

He was heavily wounded and immediately taken to the Şemdinli State Hospital, where he succumbed to his wounds, as his relatives waited outside.

Speaking about the incident, the AKP’s district head of Şemdinli, Fikri Algül, said the assailants escaped after the attack.

An operation was launched by security forces to apprehend the people who fled after the attack.

Meanwhile, a three-day curfew was imposed in the village where Budak was killed. The curfew decision was announced from the loudspeakers of the mosque in the village. 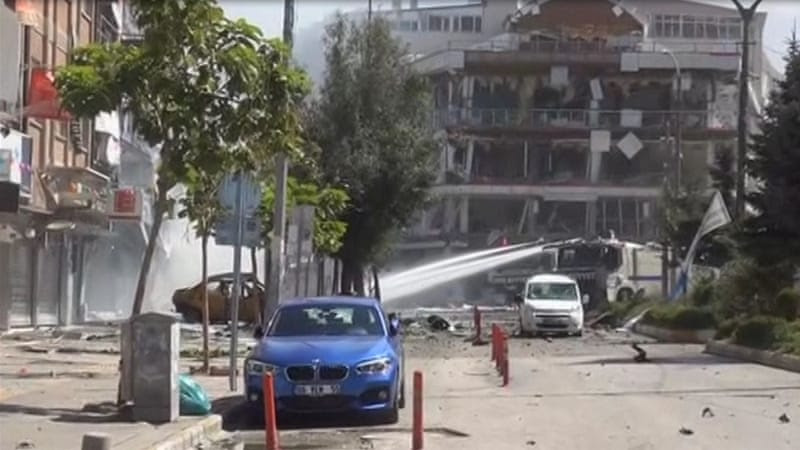 At least 48 people were wounded in a bomb attack near the ruling Justice and Development (AK) party headquarters in the Turkish city of Van, officials said.
The blast on Monday morning took place between the AK party's offices and those of the governor, state-run Anadolu news agency reported.
Besir Atalay, a deputy chairman of the AK party, blamed the outlawed Kurdish Workers' party (PKK) for the attack, which initially appeared to have been caused by a car bomb.


PKK took responsibility- Certainly this is their handiwork

– The Kurdistan Workers Party (PKK) claimed responsibility for this week’s attack in the Turkish city of Van, saying it had killed 18 police and security forces and wounded 30 workers of the Turkish ruling party.

The PKK claim, posted Tuesday, did not mention civilian casualties. It said “the majority of the casualties” were among the security forces and AKP workers.

Western media like to claim the AKP bombing was retaliatory- this is utter shite. The PKK has been terrorizing Turkey for well over a year now! The PKK organization is a terrorist group and they are terrorizing the people of Turkey. Kurds and non Kurds alike!

PennySeptember 12, 2016 at 7:20 AM
Saw the news of the bombing in Van- think I've got it bookmarked along with the US finger wagging!

It's supposed to be retaliatory for the outing of PKK mayors
that may be the excuse- but it's not the reality.

The US also had the unmitigated gall to chastize Turkey for outing terrorist cohorts of the PKK.. considering the fact the PKK ended the ceasefire in 2015 and have been launching all sorts of attacks in south east and elswhere in Turkey for a year now!

Plus were supposed to believe the US is tough on terror..

Here is the US chastizing Turkey for outing PKK affiliates:

The U.S. Embassy in Ankara said on Sunday it was concerned by reports of clashes in southeastern Turkey, after a government decision to remove mayors in two dozen municipalities on suspicion of links to Kurdish militants."We are concerned by reports of clashes in Turkey’s southeast following the government’s decision to remove some elected local officials from office on charges of supporting terrorism, and appoint local trustees in their place," the embassy said in a statement posted on Twitter.
It said it supported Turkey's right to defend itself against terrorism but noted the importance of respect for due process and the right to peaceful protest.
"We hope that any appointment of trustees will be temporary and that local citizens will soon be permitted to choose new local officials in accordance with Turkish law," it said.
Turkey appointed new administrators in two dozen municipalities, mostly in the largely Kurdish southeast, on Sunday, as it pursues a campaign against Kurdistan Workers Party (PKK) militants.

The US is concerned? Not in the way many may think?
The US is openly hostile to Turkey- Doesn't this activity have a familiar ring?
Libya, Syria...