USS Fitzgerald Failed To Respond to Warnings Before Fatal Collision

This latest news item just caught my attention.
From earlier:

Making note of the fact it is now after 3:00 pm EST. And there are a total of 6 news items covering the testimony from the Captain of the ACX Crystal that I have seen. The initial news was posted here at about 8:30 am EST. So, 6 1/2 hours later the vast majority of the five eyes media has not bothered to carry this news.

The Far More Maneuverable Fitzgerald Will Likely Bear Much Of The Blame.

ACX Crystal warned Fitzgerald as it maneuvered into it's path

"A US warship struck by a Philippines container ship in Japanese waters failed to respond to warning signals or take action before the collision took place, according to a report from the cargo ship’s captain.

The Philippines ship ACX Crystal signaled to the USS Fitzgerald with flashing lights after the US warship “suddenly” changed course to one crossing the container ship’s path, Captain Ronald Advincula’s report to Japanese ship owner Dainichi Investment Corporation states, according to Reuters.

The container ship steered to avoid the warship, but hit the Fitzgerald 10 minutes later, according to the report"

Did the Fitzgerald maneuver back into the Crystal's path?

In his report, Advincula said there had been “confusion” on the cargo ship’s bridge, and that the vessel turned around and returned to the collision site after continuing for six nautical miles (11 kilometers).


Possibly because it took that long for the ship to slow down enough to safely make the turn back?

Here's everything I can find at this time- It's paltry. 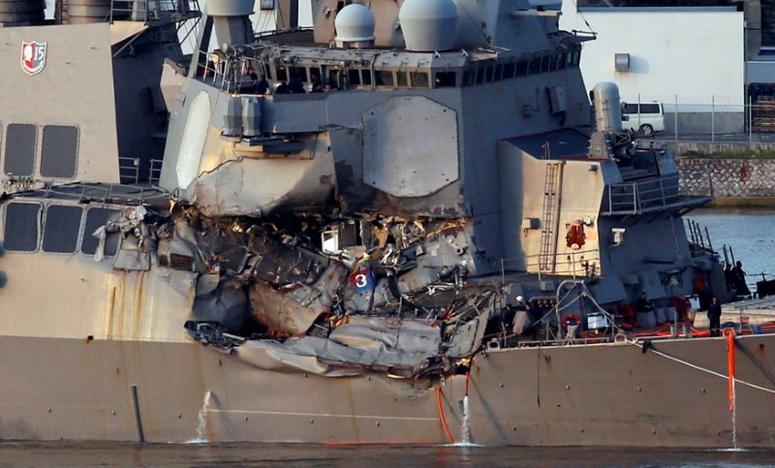 In the first detailed account from one of those directly involved, the cargo ship's captain said the ACX Crystal had signalled with flashing lights after the Fitzgerald "suddenly" steamed onto a course to cross its path.

The container ship steered hard to starboard to avoid the warship, but hit the Fitzgerald 10 minutes later

Reuters- which means it's on the news wire- but 5 eyes are doing their duty to the American military industrial complex and ignoring it!

A U.S. warship struck by a container vessel in Japanese waters failed to respond to warning signals or take evasive action before a collision that killed seven of its crew, according to a report of the incident by the Philippine cargo ship's captain.

The U.S. warship that collided with a container vessel near Japan earlier this month veered into the path of the freighter, according to the cargo ship's captain.

The captain's comments come as officials are still trying to makes sense of the collision between the USS Fitzgerald and the considerably larger ACX Crystal during the early hours of June 17. Seven Navy sailors were killed in the incident.
In a report to Japanese ship owner Dainichi Investment Corp seen by Reuters, the captain of the Philippine cargo ship, Ronald Advincula, said their vessel had signaled the USS Fitzgerald ahead of the crash. But the Fitzgerald moved "suddenly" into the ACX's path despite the flashing lights.


I believe the Daily Mail had also covered the report made by the Captain of the ACX Crystal - Keeping this one quiet..

Besides the crime and tragedy, the Fitzgerald incident is also interesting from a PR/media coverage- or actually total lack of coverage. If it's not in the news, did it really happen? If it's not getting coverage does it enter your reality? Ask yourself that when considering what gets coverage, what doesn't and finally why that is? Our perception- being managed 24/7. How are we liking the manipulation?
Posted by Penny at 8:29 AM

Email ThisBlogThis!Share to TwitterShare to FacebookShare to Pinterest
Labels: US