Forfended! Did China Influence the Military Take over in Zimbabwe?

Forfended: To fend, ward off or avert
Instead of using preemptive.

There was information that I’d come across that made me ponder the influence of China in Zimbabwe... Was there a concern that this influence might be challenged?

ZIMBABWE’S military chief behind the coup may have sought China’s approval during a trip to Beiing last week, it has been revealed.

China’s Foreign Ministry tried to dismiss the visit as a “normal military exchange” on Wednesday, after the army seized power in the African country.

Zimbabwe's military took control targeting "criminals" around president Robert Mugabe but gave assurances on national television that the 93-year-old leader and his family were "safe and sound".

Mr Mugabe remains under house arrest but is, for the moment, still President of Zimbabwe while the army’s generals now hold power.

General Constantino Chiwenga met Chinese Defence Minister Chang Wanquan in Beijing on Friday, where Chang expressed a willingness to promote relations with Zimbabwe, China's Defence Ministry said in a short statement last week, which has sparked concerns over the influence China may have over the former British colony.

The ministry showed a picture of the two men, both wearing military uniforms, shaking hands, and an officer from both countries sitting opposite each other holding a meeting at the People's Liberation Army headquarters in Beijing. 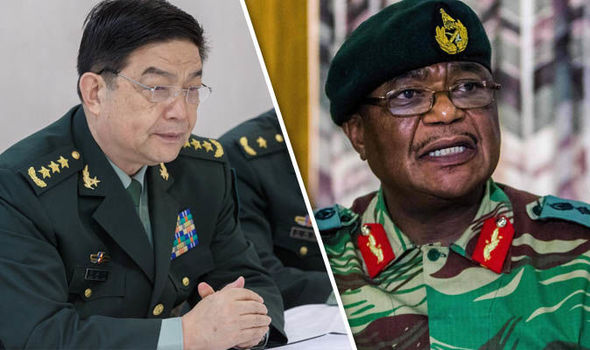 Asked whether Chiwenga had briefed China on plans to seize power, Chinese Foreign Ministry spokesman Geng Shuang said the Defence Ministry had already released information about his trip and that he didn't have an understanding about the specifics of his reception in China.

Mr Geng said: ”I can only tell you that his visit to China this time was a normal military exchange mutually agreed upon by China and Zimbabwe,” referring other questions to the Defence Ministry, which has yet to respond to a request for comment.

He added: ”As a country that is friendly with Zimbabwe, we are paying close attention to developments of the situation in Zimbabwe"

"Maintaining peaceful and stable development accords with the fundamental interests of Zimbabwe and regional countries, and is the common desire of the international community. We hope the relevant parties in Zimbabwe appropriately handle their internal matters."

China and Zimbabwe have a close diplomatic and economic relationship and Beijing has stood with Mr Mugabe's government in the face of Western economic sanctions.

In August, Zimbabwe's government said a Chinese company planned to invest up to $2billion to revive operations at Zimbabwe Iron and Steel Company (ZISCO), which ceased production in 2008 at the height of Zimbabwe's economic meltdown.

That same year, China vetoed a proposed Western-backed UN resolution which would have imposed an arms embargo on Zimbabwe and financial and travel restrictions on Mugabe and 13 other officials, saying it would "complicate", rather than ease, conflict.

China, which has displaced Western rivals to become Africa’s largest trading partner and is a major investor in Zimbabwe, notably declined to call for Mr Mugabe’s restoration yesterday, despite his long ties to Beijing dating back to the Cold War.

Also interesting when thinking about the coup in Zimbabwe:
hattip anonymous commenter! Two specific links are included below anon's comments for you to read

AnonymousNovember 15, 2017 at 11:23 AM
The Gupta scandal reaches British banks


HARARE, Sept 16 (Reuters) - A Russian consortium including arms conglomerate Rostec have partnered to develop a $3 billion platinum mining project in Zimbabwe, the single biggest investment in the country since independence in 1980.
The government of President Robert Mugabe has been shunned by the West for over a decade over alleged human rights abuses and it has turned to China, Russia and other emerging powers for aid, trade and investment.
Aside from the mining deal in the country with the world’s second-largest platinum reserves, there was talk of weapons.

Who is Yaron Yamin

Yamin remained under the media radar for many years, going about his business of making his billions and growing his mining empire and influence in Zimbabwean business and government circles without making too much noise about it.
Last October, however, the elusive Mr Yamin came out of the shadows and was widely reported on in the Zimbabwean media.

Israeli investors forge partnerships was the headline on a SOUTHERNEYE.co.zw story last October: “A group of Israeli investors have forged a consortium — Yaron Goldstone Mine — with local entrepreneurs to develop two gold mining and processing projects in Bulawayo and the Midlands valued at $5 million,” wrote the website.

On 23 October, the CHRONICLE published a similar story, headlined: “Israeli investors keen on Zim” which included this picture. The caption read: “Israeli investors watch Qubani Ndlovu and John Moyo demonstrating how they sieve gold during a tour of Goldenstone company in Shangani. Among them are from left the company chairman Mr Yaron Yamin and chief executive officer Ms Henrietta Rushwaya (third from left)”
Then Yaron Yamim branched out into diamond mining, bringing other Israeli investors to the party. On 2 December 2013, ROUGH & POLISHED, an international diamond industry news website published “Israeli miner eyes Marange diamonds.”
Quoting the linked article from the Daily news, among other sources, Rough&Polished said: The Israeli mining investor Yaron Yamin and his local partners are on the verge of tying a deal with the Zimbabwean government to mine diamonds in Marange. The state-owned Zimbabwe Mining Development Corporation (ZMDC) was required by law to control at least half of shareholding in any operation in Marange. Daily News reports that Yamin… currently engaged in gold mining, had lined up two of Jerusalem’s ‘largest’ diamond miners to invest in the venture.”


Mugabe under "house arrest" Emmerson Mnangawa, Man of the Hour

Following up from last night- Zimbabwe Coup in Process?